What are you looking for?

Are you also a fan of our Mix for Red Velvet Cake and is it therefore one of the main mixes among your baking supplies? Perhaps you even know its preparation by heart? Then please read this news item carefully. We had to adjust something to the preparation method.

No worries, an adjustment to the preparation method does not mean a change in quality, taste or texture. We love this mix as much as you do. So the cake had to remain just as tasty, just as red and just as velvety soft. No question about that. 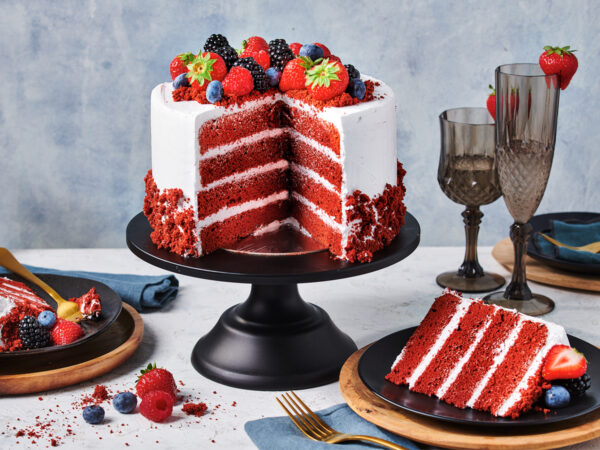 So what did change then?

Due to an adjustment in our production line, we had to decide to remove the oil from the mix.

Oil? Didn’t I always add that myself?

That’s right! But in addition to the oil you added, we had already put a bit of oil in the mix. In order to make the production line run better, we no longer add that oil. We therefore ask you to add a little more yourself, namely 12 ml (10 g). This way you will eventually get the exact same red velvet cake and our production line will run like a well-oiled machine again.

How exactly does this work?

Day in, day out, your baking mixes, sugar paste and decorations roll off the conveyor-belt in a continuous stream. A well-oiled machine, which has been adjusted as accurately as possible to ensure that you always receive the exact same product, the stores always have stock and the quality is always 100%. An important and very precise process, because an adjustment on the left can unbalance something on the right. That is why we continuously monitor this process so that our machines produce exactly the right amount of products and always put the exact same ingredients in the exact same jar or bag.

Due to a change in our factory, we now have to make the Mix for Red Velvet Cake on a different production line. It makes exactly the same red velvet mix, so you will not have noticed anything about that switch. However, we noticed that the production speed was slightly lower. Meaning, slightly fewer red velvet mixes were produced in the same amount of time. No major differences, but because we produce very large numbers of the Red Velvet Mix, such a small difference in production speed can already lead to empty compartments in the stores. Unfortunately, that’s what we saw happening. The Red Velvet Mix sold out more often. You actually baked harder than our machine could handle!

Of course we have looked for a solution that wouldn’t involve a change for you. For example, by working with slightly different ingredients, so that the machine could produce faster. But that always turned out to have a negative effect on the quality of the mix. And that’s just never an option. Easy as that.

That’s why we came up with the idea to remove the oil from the mix, as it is an ingredient that you already add anyway. So by asking you to add a little more, in the end you will receive the exact same cake. And that saves our production line just one step, so that it is back in balance and your beloved red velvet mix is back in stock in your baking store.

In a nutshell, what's different now?

Anything else? Other than that, nothing has changed!

Mix for Red Velvet Cake
But didn’t you change something with the other baking mixes too?

That was just the packaging! Because we got a new logo, all products come in new packaging. However, its content has remained exactly the same. Nothing has changed in the ingredients or preparation method.

Tips and tricks
Need some help? We got your back
Points of sale
Shop your favourite FunCakes items here
Subscribe to our newsletter
Our best kept baking secrets in your mailbox